This is the obvious largest cliff on the entire hillside, dominating the left side of the formation.

While there are now a solid collection of routes worth a visit, there is still room for many new routes.

See "Left Wing" for approach, which describes either a trail & scramble (with fixed rope), or rappelling "Mixed Precipitation". The following assumes you have done one of those, and made it to the top of "Main Cliff" and considers choices for descent to the base.

If approaching from the roped-scramble, the first Main Cliff route you will encounter is the rocky knoll that is the top of "Arnor". This is a 2-pitch rappel to the base.

If you continue skier-'s right down along the herd-path at the top of the cliff, you'll next come to the collection of routes near "Felix Felicis". There is a fixed rope from an anchor in the trees to the top of Felix Felicis, make the down-scramble more comfortable. If you curve back left-wards along the cliff-top, there is a 2nd fixed rope protecting the traverse to the top of "A Story for Jan". Both are 30m rappels to the base.

If approaching from the base of the "Mixed Precipitation", if you head directly forward/down towards Main Cliff, you should find yourself close to the fixed rope on "(easy slab escape)", but this is not a recommended descent choice. (That rope is there primarily for developers to get back out again.) Instead follow the base of "Upper Left Wing" climber's right (past Lemon Technique) until a bit of a herd path breaks away from the base of the cliff, towards the top of Main Cliff. This should bring you out near the top of the "Felix Felicis" rappels described a couple paragraphs above this.

(Base still requires work for path between climbs.)

Lower-off or rappel the routes. 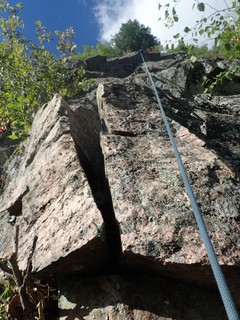 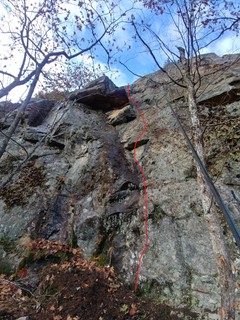 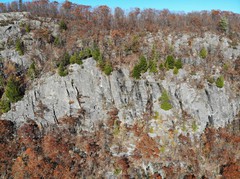 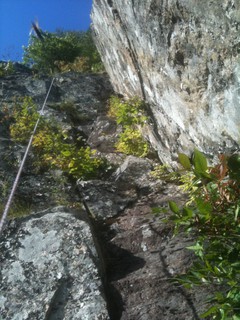 Check out what is happening in Main Cliff.