Please note that we use cookies to improve the use of this website. By continuing to browse the site, you accept theCrag Site Usage Policy I Agree
Central America
Costa Rica

Historically, Costa Rica was colonized by Spain until its independence in 1821, and as a result Costa Ricans speak Spanish and have many traditional mores based in Spanish culture. Long since the governance of Spain, Costa Rica has developed into a world leader in terms of environmental stewardship and population happiness. According to the New Economics Foundation, in 2009 Costa Rica was the happiest country on the planet. In terms of environmental stewardship, Costa Rica’s government has made the promise to become carbon neutral by the year 2021. Costa Rica also has 23% protected landmass, the largest in the world - an important attribute as the country hosts the worlds greatest species density and diversity. Today, the small Central American country is best known as a tropical tourist paradise, and a friendly (outside of the big city, expect to say Hola or Buenos to nearly everyone you encounter) Latin country of approximately 4.5 million people. Bordered by Nicaragua to the north, Panama to the south, the Pacific Ocean to the west, and the Caribbean Sea to the east, Costa Rica is renowned for its beautiful beaches, laid back culture, and amazing biodiversity. It may not come as a surprise to know that tourism is Costa Rica’s largest economic driver. In fact, tourism creates more currency exchange than all agricultural crops (the largest three being coffee, pineapples and, bananas) and industry combined. Agriculture has long been replaced as the major provider for the Costa Rican people, and now holds only 8.6% of the GDP, while industry accounts for 31%, and tourism 60.4%. Actually, Costa Rica has the largest tourism industry in all of Central America, a fact that is closely related to the relatively good quality of life, infrastructure, and political stability. The tourism industry itself has developed way beyond the all-inclusive-lay-on-a-beach-for-a-week-holiday. The country has become a hotspot for adventure, hosting some of the worlds best white water paddling and rafting, heart-pounding high bungees, tropical rainforest canopy waterfall rappelling, canyoning and caving, world class mountain biking, and hiking. Costa Rica’s exotic natural environment also allows foreigners and locals alike to get up close and personal with dense rainforest, majestic sea turtles and marine wildlife, a plethora of colourful birds and parrots, active volcanoes, coral reefs, monkeys, crocodiles and so much more. Beyond the tourist attractions, Costa Rica also hosts a wonderful culture, rich history, and a beautiful people. National pride among Costa Ricans, or Ticos (feminine, Ticas), is strong, particularly regarding the economic prosperity, high literacy rates (97%), access to sanitation and clean water (92% and 97% respectively), stable political establishment, and relatively low crime rates, in comparison to other Central American countries. In general, Ticos consider themselves as peaceful (a fact that is enforced by the abolishment of the army in 1949) and fun loving. The saying ‘Pura Vida’ is regular in Tico conversation and literally translates to ‘Pure Life’, but embodies a wider lifestyle that provides a free-spiritedness and stress-free ease of living. The high national pride is well deserved not only for the comparative standard of living, but also due to the quality of life. With national public health care (alongside a private system), a varied diet, a fairly stress-free lifestyle, and tropical climate, Ticos have a longer life expectancy than many ‘more developed’ nations such as the United States. The high quality of life that Ticos enjoy permits them to divulge into their natural environment, arts and culture. On most weekends, many will visit one of the countries stunning beaches, hike the mountains of the central valley around San José, see a movie in a local cinema, or go into the city to visit a museum, see a play, art gallery, or concert. To say the least, there is nothing short to do in Costa Rica, however there is one activity that will always stand above the rest as close to the Tico heart: fútbol. As with the rest of the Latin world, Costa Rica loves soccer. Almost every town is situated with three main landmarks in the center: a church, a major bus stop, and a soccer pitch. If you ever lack something to talk about with a local (unlikely), you can always pick up a local paper and find a solid section dedicated to the sport: catch up on the latest, and let the soccer talk fly. As Costa Rica looks into the future, many developments lay on its horizon. With almost one third of its population under the age of 15, the number of North American and European expats increasing every year, and increasing foreign investment, the demographic and economic landscape of the once mainly coffee producing country is undoubtedly going to go through some heavy metamorphosis. However, it is not only the future of Costa Rican society that appears promising but also the Tico climbing scene. It has been about a decade since individuals took to the vertical world in Costa Rica, and there is much potential for the expansion of routes, areas, and population interest. For more on this read the section Costa Rican Climbing History at the end of the Introductory Chapter.

Costa Rica has two seasons, rain and sun. For the most part, rainy season occurs between May and November with the rainiest months being October through November. The dry season, between December and April, is the best time to visit the country, with the best months being from late December through February when the temperature is warm, but there is a constant breeze. Later into the dry season temperatures can become very hot as the northern winds die down. This is especially true on the coasts. As for climbing, the best time is late December through February. However, year round climbing can be obtained due to the fact that some crags, like Cachi, are overhanging, and therefore in a light rain remain dry. In the dry season it is best to search out climbing that is shaded, as the tropical sun can make the rock too hot to touch and midday humidity can create a sauna like atmosphere.

This region has an unlocated crag! If you think you know where San Jose is located then please take a minute to locate it for the climbing community. 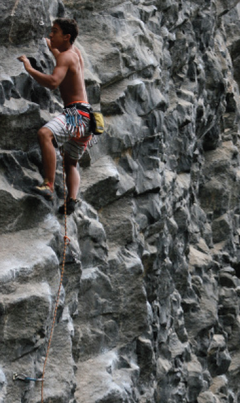 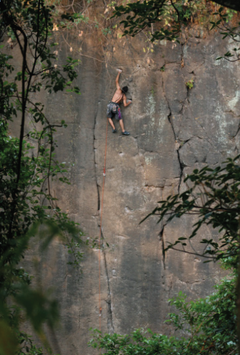 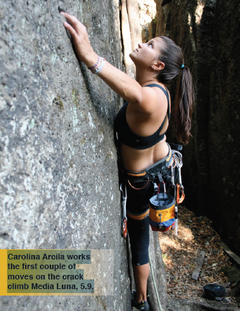 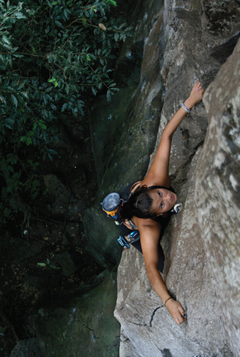 Check out what is happening in Costa Rica.