El Coliseo is slightly west of the town of Piedades and hosts a very modest three climbs on a small wall on the edge of a farm. Despite the lack of route quantity, the area is a good spot for strong beginners who are starting to lead, is relatively close to San José, and is free.

A single wall of approximately 10m hosts all three of the routes at this area. The wall is situated near the entrance of a farm and you should ask permission from the landowners in order to climb. The wall itself is practically vertical, with a slight forward lean, and large overhanging trees. The section that has been bolted is the only spot on the wall that is suitable for sport climbing as the remainder is either covered with vegetation (mostly tree roots or vines) or is too short to justify bolting. Bouldering is an option.

The rock here is ignimbrite and has a good number of deep pockets, cracks and crimps. Rock quality is good; just expect to do a little cleaning early in the climbing season.

A single small wall of approximately 10m hosts only 3 routes that provide a good learning ground for those not wanting to jump head first into lead rock climbing. During the wet season, the wall can become very dirty due to the rain, therefore summer climbing is recommended and you may need to do a quick cleaning of some of the holds. Climbs are listed from let to right when facing the wall and your back is to the road.

There is also the possibility to do some bouldering. Despite only having three routes, all three are of good quality.

Although El Coliseo may not provide as many routes as some other areas in Costa Rica, there are some good eating locations in the area. Da Marco Ristorante Italiano (P:2282- 4103) and La Oveja Negra Bar y Ristorante (P:2203-0606) are highly regarded by locals and visitors alike. Da Marco serves up homemade Italian (obviously) cuisine and mainly caters to the Hotel Canal Grande customers, while the latter has a tasty tapas menu. You also have the option to head into Piedades for Chinese, or Tico cuisine. For those tight on budget, there is a supermarket just down the road from the crag.

Costa Rica, more often than not, is an adventure to climb. Between trekking through jungles, fending off insects, and crossing paths with tropical animals you are sure to have a great day out. Here are a few things to keep in mind when climbing in Costa Rica:

On highway 27 out of San José head west towards Escazu, Santa Ana and Ciudad Colón. The highway is at the far west side of Paseo Colón and travels south of La Sabana. Just outside of San José you will have to go through a tollbooth, which currently costs 290 colones. Continue driving for about 20-30 minutes and pay attention to signs for Ciudad Colón. Just before exiting the highway on the turn off for Ciudad Colón, you will pass a Ducati Motorcycles dealership and a large Bali store which is part of a larger modern looking glass and steel building on the right side. Take the turn off, and pass through a second (free) tollbooth. The off ramp will bend to the left and then lead you down onto a road. Take your first, immediate left, the resturant La Oveja Negra will be on the left side. Follow this road until the T intersection. Take a right and drive for about 2 minutes to the rock, keeping to the left of the San Marcos shrine. The rock is at the entrance to a farm (finca) with a blue gate, just before the road becomes gravel.

From anywhere in San José take a taxi or walk to the Comtrasuli Terminal (P:2258-3903, 2416- 8036) (also known as the terminal for Ciudad Colón). Any of the collector buses for Ciudad Colón will do and should cost no more than 500 colones (350 at the time of writing). You can also catch one of the collector buses to Puriscal or Palmichel, as they take the same route to your destination, however they cost 20 colones more. After approximately 30 minutes on the bus pay attention for the second tollbooth you will go through. Unlike the first tollbooth just outside of San José, the bus will come off the highway and pass through the second one without paying, as this tollbooth is out of commission. After going through the tollbooth, the next stop is yours. The bus will take the off ramp, which bends to the left, and then drive down onto a street. Request for the next stop as you go through the tollbooth. The bus will stop at the first intersection, which is where you get off. Begin the approach.

From the bus stop, take the south leading road up a short hill (no more than a 10-12 minute walk).When you reach the end of the road, you will have a choice to go either right (towards El Coliseo) or left (towards Piedades). Turn right, and pass the Super El Piedades on the right side. The first street you pass on the right leads to Ciudad Colón. When you see the shrine with a statuette reading San Marcos, keep left and continue down the road for about another 3-5 minutes. The rock will be to the left just beyond the entrance to a farm (finca) with a blue gate, before the road becomes gravel. Watch out for snakes as you cross the field! There are over 130 species of snake in Costa Rica, 17 of which are venomous. Make a lot of noise and be aware.

Respect the land owners.
They are kind enough to let you use their property for your enjoyment.
Respect other climbers.
Climbing is a community sport where the only opponent is the cruel crux that sends you airborne.
Respect the environment.
Above all, respect the environment. The plants, the earth and the rock itself were here long before you came into existence and will continue to exist long after you are gone. Sustain its survival by treating it properly. 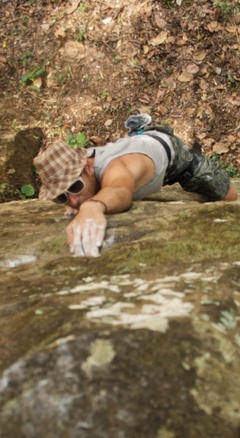 Check out what is happening in El Coliseo.