Just south of San José, on the border of a town named Aserri, a 30m high boulder jets out of the hillside and is well known by locals due to its prominence on the landscape.

If you wish to visit Piedra de Aserri it is recommended by locals that you do so in a larger group of 5 to 10, stating that theft and muggings have been issues in the past.

A massive boulder displaying a large white cross on top composes all the routes on a single wall. For most of the wall the bottom 5 meters are vertical and therefore support the majority of the crux moves before the wall leans forward slightly and the climbing turns to slab. The top of the wall has some vegetation that can easily be removed, or avoided. Unfortunately, it would seem that a teenage ritual is to throw garbage off the top of the rock, and therefore some of the vegetation acts as a catch basin for debris. Likewise watch for glass at the bottom of the wall. The view while standing on top of the boulder is worthwhile, and given the accessibility to the top, this is one of the few climbing in Costa Rica where topping out is an option.

Unique to any other climbing in Costa Rica, at Piedra de Aserri you will find tons of small knobby rock protrusions that act as both crimps and pinches. As you stand with all your weight bearing down on a knob the size of a black bean, the thought of the tiny protruding rock breaking off commonly drifts through your mind, however the rock is surprisingly strong and of good quality. The texture of the rock is very rough, and finger pads wear down fairly quickly.

Being so prominent on the landscape, it is of no surprise that Aserri was one of the first climbing areas bolted in Costa Rica. Relive some of the history and scale the climbs done by the pioneers. Climbs are listed from left to right when facing the wall.

The 30 minute walk up to the rock puts you 30 minutes from your closest food source, so it is best to plan ahead and take some food and water with you. At the base of the approach there is a small super market (point of interest A) where you can get some last minute munchies or some after climbing rehydration. Within the town of Aserri there are also restaurants, sodas, and larger grocery stores.

Costa Rica, more often than not, is an adventure to climb. Between trekking through jungles, fending off insects, and crossing paths with tropical animals you are sure to have a great day out. Here are a few things to keep in mind when climbing in Costa Rica:

The combination of congestion, one way roads, and nameless streets makes getting to Aserri a challenge to say the least. The best thing to do is to constantly ask locals for directions, first to Aserri, and then once in Aserri, to Piedra de Asseri.

From downtown San José, take Calle Central south until it turns into Costa Rica Highway 214 (which is actually just a regular, busy Costa Rican road). You will come to a roundabout that goes under the highway; continue south on 214. Continue on 214 for approximately 5km where 214 will combine with 209 and become 209 on a single road continuing south. You will pass a cemetery on the right hand side and after another kilometer or so you have reached the town of Aserri. From here it is best to ask a local for directions to the rock.

After passing the church and municipality building in the center of Aserri, continue straight through the next two intersections and then at the ‘Y’ in the road stay left. Drive for another 500m and park at the minisuper (small store or convenience store) on the right side. From here you will walk.

Catch the bus to Aserri from the center of San José. Ask around for the correct bus stop as the bus goes past the very busy intersection of Calle Central and The Interamericana Highway. Ensure that the Aserri bus you get on is for Barrio Mercedes. Tell the bus driver that you are going to Piedra de Aserri and he will drop you off at the minisuper where you will start your approach.

From the minisuper, where you can already see the rock up on the hill above you, walk north east down the hill on the side of the minisuper. When a dirt road splits off the main road to the left, follow it up a short hill, and then when a smaller trail breaks off to the right up the hill, follow it. This sometimes steep trail will go directly to the base of the rock and will continue to the top of the rock where the white cross is.

Respect the land owners.
They are kind enough to let you use their property for your enjoyment.
Respect other climbers.
Climbing is a community sport where the only opponent is the cruel crux that sends you airborne.
Respect the environment.
Above all, respect the environment. The plants, the earth and the rock itself were here long before you came into existence and will continue to exist long after you are gone. Sustain its survival by treating it properly. 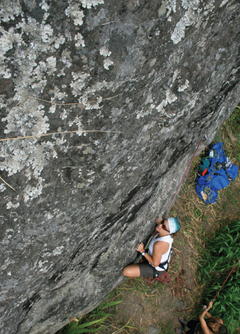 Check out what is happening in Piedra de Aserri.