Vigla canyon belongs to the group of canyons surrounding the Zakros village. It has considerable climbing potential.

Vigla canyon is situated about one kilometer from Zakros village. It is one of the canyons here that are more distant from the sea, unlike Dead Gorge or Katsounaki canyon in Xerokambos village. Due to this, it is windier there compared to those crags that are close to the sea and not so hot even in sunny summer days if you are in shade. Due to its orientation to the east and north-east the best time for climbing there in summer is in the afternoon. Limestone in Vigla canyon is excellent quality, it does not suffer from the presence of salty air which is typical for spots right at the sea. Vigla belongs to a local group of crags surrounding the villages of Xerokambos and Zakros. There are at least ten canyons, that are close to each other and where climbing can be developed. Xerokambos has six of them, Zakros has three. Currently climbing is at the beginning here, only a tiny part of all possibilities is exploited. Pitches that are currently done in Vigla canyon are in a sector called by locals Katalava. Routes are between 5b-7b. The pitches are done on leaning slabs to vertical walls, only sometimes slightly overhanging.

The best is to go with a car from Zakros village using the road to the small church of Agios Giorgos. The road starts right at the end of the village. From the main road leading to Xerokambos turn right on a very steep concrete road leading up among olive trees, the dirt road starts after a few hundred meters. The dirt road is mostly in a good condition even for a smaller car. Park close to the church, but let there free room for turning big farmer´s cars. From this parking lot follow the path up to the canyon which you see above, you can follow small red dots sprayed on the rocks. There is a gate at the entrance, please don´t forget to close it. The path is about 15 minutes to reach the big cave, then 3 minutes to the left part of Katalava crag where are routes.

There are many apartments and villas for rent in Zakros and Xerokambos.

The Vigla canyon remained unnoticed by climbers until summer 2019 when Czech climber Petr Fiala went to the canyon for a walk and discovered these nice walls. 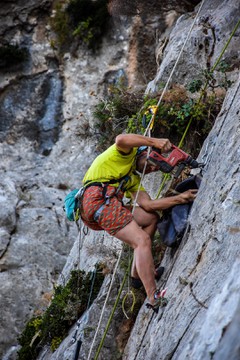 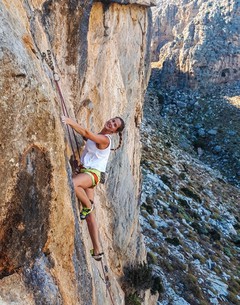 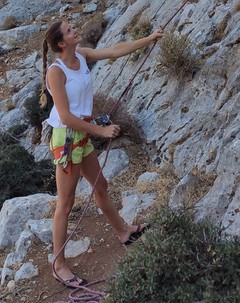 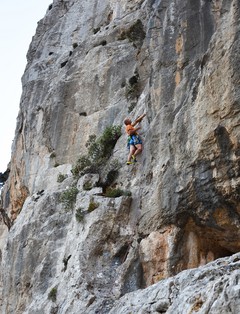 Check out what is happening in Vigla canyon.