Climbing on best quality limestone of all angles. Vertical and overhanging walls are full of typically Kalymnian flowstone and stalactite holds. Popular for it's local food and international scene.

Picking when to go depends on many factors. The winter months (December - March) enjoy very mild temperatures (average maximum of 14-16C) but this is the wet season and it will usually rain on 9-13 days per month. Locals rave about climbing on nice winter days though, if your schedule allows for sitting out a few winter storms, and the fact that all the shops will be shut. Later in the wet season, seepage can be heavy and this prevents climbing on most flowstone routes (which many people consider to be the best routes), and this is a significant factor during the months of January-March, and also April if rainfall was above average. If you want to swim, the water is too cold (<19C) during the months of November to April. By May the seepage should be mostly gone, and swimming should be ok, but the average maximum temperature is up to 24C and the sun is nearly at its hottest which can enforce shade chasing, and the crowds are sizable (albeit half those in October). Then summer hits, and the average maximum temperature is over 28C during the months of June - September, which for most people rules out a dedicated climbing holiday, but is reportedly a great time if you are happy to climb early, and to mix in some swimming and sailing which are at their best. September - November has good air temps, mostly good water temps, and no seepage, but this is offset by having by far the biggest crowds and queues at the crags.

A great intro on climbing on Kalymnos can be found on Lydiascapes.

By Foot — Depending on where you stay, the approach-paths to some of the best crags of the island are just a short walk away.

Bicycle — Also a valid option if you want to save money, be eco-friendly, or wanna get ripped. A good choice for getting around in Masouri or to get to Odyssey, Kasteli and surrounding crags. Typically 5€ per day.

Scooter — The most popular choice on Kalymnos.

Masouri is the most popular choice as everything you're coming to Kalymnos for, is within walking distance. There are also good options south of Masouri (Mirties, Kamari, Panormos) or spread around the rest of the island (Below sector Odyssey, Arginonta Bay, Emporios, ...)

Developed very recently, compared to most European climbing destinations. The first climbs where established by Andrea Di Bari and Team in 1997 (Sectors "Arhi", "Poets", ...) after Di Bari discovered the island's potential one year prior. About 10 years later the route count surpassed 1,000. The 2019 edition of the Kalymnos Guidebook by A. Theodoropoulos covers 3,400 routes. 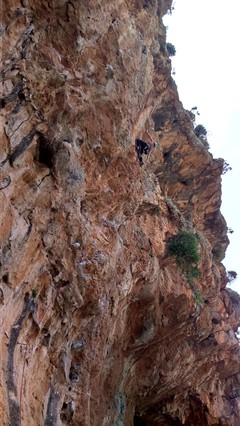 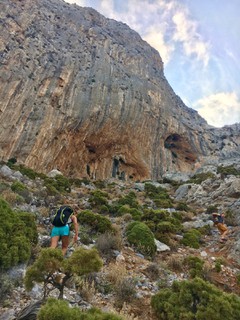 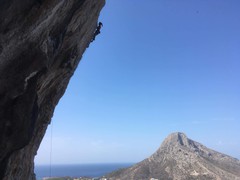 Check out what is happening in Kalymnos.