Please note that we use cookies to improve the use of this website. By continuing to browse the site, you accept theCrag Site Usage Policy I Agree
Asia
Hong Kong
New Territories
Waterfall rock

The crag is formed by basalt columns similar to those seen at classic locations such as Giants Causeway in Ireland, only here the rock has been subjected to a little more in the way of tropical weathering. As such, the rock is mostly solid but has a thin covering of flakey weathered rock that will fall off with use. The top of the crag is very loose and the safest exit is by moving right along the ridge towards the headland. Beware of occasional very large unattached rocks. Helmets are recommended.

Gear is plentiful throughout nearly all routes, small wires and small to medium cams, and as such it is requested that climbers retain a traditional ethic when climbing here.

A full ropes length is needed for the left hand side of the crag. All the routes completed so far have been up obvious crack systems, however plenty of potential remains for harder face and arête routes remains.

The bottom of the crag is located at a wave cut platform which can get covered by the sea if a big swell is running so its best to visit the crag during low tide / periods of generally calm weather.

This approach can be made in all but high tides. However the bottom of the cliffs are washed by waves if there is a swell running so flat seas are advisable.

The approach will take you about an hour from the gates of the national park in a taxi.

From Sai Kung town take a bus to the country park entrance on Tai Mong Tsai Road. From here it is necessary to take a taxi to the end of the East Dam of High Island Reservoir (by the large hexagonal sea defenses.) Walk to the far end of the sea wall, passing the outcrop of Po Pin Chau, and cross over the fence before continuing along the headland on a small path.

Cross a small stream and ascend to the saddle of the hill (Fa Shan). The path splits into three when you reach the headland. Follow the steep path which cuts directly down the pebble beach (撿豬灣滾石灘 Kim Chu Wan) and carry along the coast, around two head lands (past some otherpotentially worthwhile crags) until Waterfall Rock - Fashion Crag is reached.

Developed by Matt Tranter and Ben George in 2004. Does not get much traffic because of the difficulty in getting here, the lack of bolts and the fact that most people in Hong Kong would rather be poked with sharp sticks than be seen in the New Territories! 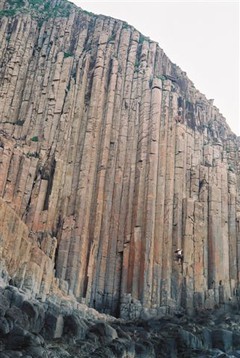 ★★ More fun than shopping for shoes HVS 5a 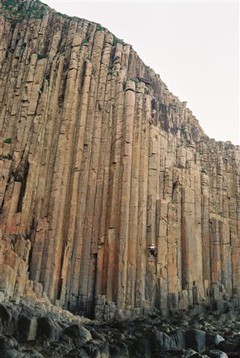 Matt Tranter on ★ Big boots VS 4b 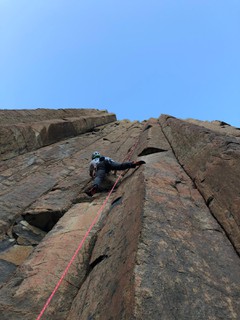 Check out what is happening in Waterfall rock.