Spread over beautiful village in an area of more than 5km it offers great sport climbing routes on its granite crystal engraved sandstone feature. There are More than 30 Hillocks with a height of 50m.

Pandavula Gutta (hillock) also known as Pandavula Guha (cave), located about 50 km away from Warangal city near Kothapally village in Regonda mandal in the district, has become a perfect destination for adventurers, particularly rock climbers and trekkers.

Maintained by forest department of Telangana and Eco- Tourism Telangana. It was developed and bolted with their help.

From Regonda you can take auto to crag, it is approx 5km from there to crag.

Camping is only option for now with easy permission from tourism department. Rooms and hotels can be found in Bhupalpally which is around 23km from crag.

It has been developed for climbing and adventure. Climbers are welcomed to bolt and develop the area though you have to take a permission for that from tourism department. There are areas with prehistoric rock art in the caves, off-course they are out of bound.

The Telangana Region is belived to have been mentioned in the mahabharata as the Thelinga Kingdom, which is said to have been inhabited by the tried known as Telavana, who fought on the Pandavas side in the great war of Kurukshetra. Where the Pandavas spent their life in exile (Lakka Guham). This site was discovered by K Ramakrishna Rao, an official of the Department of Archaeology and Museums, Hyderabad, in 1990.

There are seven rock shelters (caves) in which the paintings have been found. The figures depicted in the paintings are those of peacocks, lizards, tigers, frogs, fish, deer, etc., and geometrical designs and impressions in green, red, yellow and white pigment colours. Inscriptions Besides these rock paintings, inscriptions of the Rashtrakuta period and fresco paintings of late medieval period have also been reported from these hillocks. Some of the paintings were superimposed, depicting highly developed anatomical features and curves.

The rock shelters at the foot of the hill contain only faint traces of red paintings, and shelter locally called ‘Vongudu Gundu’ (bending rock) and along with traces of paintings, microlithic scatters can also be seen.

This crag is unlocated

If you know where this crag is then please take a minute to locate it for the climbing community. Please contact us if you have any issues. 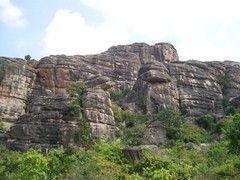