Almost all routes lead across gray, usually slightly inclined dolomite slabs. All routes are well secured with bolts or pitons, as well as the stands; always sufficient, a 50-meter rope, also for rappelling. 10 quickdraws are in most cases enough.

All sectors are facing west with sun from 12 clock until sunset; in midsummer very nice evening.

Best season is from May to October, depending on snow and weather conditions. The best certainly from July to September.

From Wolkenstein you drive towards Passo Sella to the junction of the mountain pass that leads to Passo Gardena. You drive straight ahead (towards Passo Sella), about 300 meters to a large parking lot; in just a few minutes away from here all sectors of the climbing area.

About the parking lot you can clearly see the western wall of the Meisules dla Biesces. The left half consists of gray, compact limestone slabs, while the right side dominates yellow-brittle rock. Right below it is a striking slab pillars, the 'Traumpfeiler'. Right of the pillar flows a waterfall, which is usually dried out in the summer months. In five minutes you reach the base of the falls. If you follow this path of traces left (50 m), one arrives at a wire rope passes to the right of the entrances to the 'Traumpfeiler'. If you follow the little path marked out to the left so it is a mere 150 meters below the Snoopy slab, which is left bounded by a striking scale. Just to the right of the above-mentioned waterfall is a slab with six routes (6a). From here a steep path leads to the right to 'Woodstock' slab.

The history of the climbing area Cansla begins in 1983 At that time S. Stuflesser and G.Demetz from St. Ulrich started the job, to explore the western wall of the Meisules dla Biesces. Your first bolts they beat in a short limestone slab, the so-called "Snoopy-Platte". Here is the first sport climbing routes in the Sella group emerged: 'Snoopy', 'Unmögliche Phantasie' and new annual pitches with ever increasing difficulty.

A year later, the striking, 150-meter-high pillar slab was developed below the striking yellow wall. S. Stuflesser and C. Großrubatscher set up the route 'Traumpfeiler' from above; with this classic, which gave its name to the pillar, a new era began in Val Gardena: the time of extreme and safe sport climbing. You have to imagine that until 1983 there's not a single bolts was beaten in the modern sense. For climbing in the area Val Gardena, Dolomites and in the whole, the early eighties were thus a period of prosperity and the expansion of boundaries. Nevertheless, bolting in the Dolomites was strongly asked over and over again in question. And is today.

After the first ascent of 'Traumpfeiler', a VIII, on which still overhang specialists tough time, the climbing opportunities have multiplied in Cansla, be it on 'Traumpfeiler' itself as well as the 'Woodstock' slabs on the right. The industrious among the route setters, members of the Gardena Alpinist group "GAG", were Simon Demetz, Karl Vinatzer, Manfred Stuffer and Adam Holzknecht. But the route setters of "G.A.G." had not only sport climbing routes well prepared, but also extreme first ascents in alpine terrain, especially in the Sella group performed.

At present the visitors of Cansla find about 90 pitches, offer the most vertical, partly overhanging climbing. The most difficult tour of the crag is 'Furia'. The large roof at the left edge of the pillar was first climbed in 1990 by Manfred Stuffer. Repetitions are to 2010 not known. 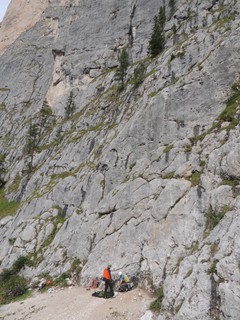 Kai and Felix at Wasserfall 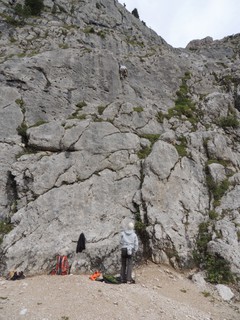 Jürgen on La n'compra 6a

Check out what is happening in Cansla.