Being an island in the very south of Italy, Sicily is an ideal climbing destination for the colder months of the year. It offers superb sport climbing on limestone, but also much more.

The best source is the fifth version of La Roccia di Sole which was published in 2022 and covers the whole Sicily (some minor crags were left out). The San Vito area has it's own guidebook which is regularly updated, Sicily-Rock - which is available for purchase in the El Bahira camping.

Bouldering:: not too many people heard about the bouldering in Sicily, which is a shame because there are two great areas here, and both on sandstone blocks.

The minumum needed is a 60m rope and 15 quickdraws as that's sufficient for most routes here, but it's better to bring a 70m rope and 18 quickdraws so that you can climb almost everything. For multipitches you will need extra trad gear and slings

Rest day tips There's plenty to do in Sicily, even if you didn't want to climb at all.

central sicily from north to south

you can fly to Palermo, Trapani or Catania. It's advisable to rent a car, as public transport in Sicily isn't the best. If San Vito lo Capo is your only destination, it's possible to manage without a car.

Plenty of campings, guesthouses or airbnb's are available all around Sicily. As climbers come here from October to May, the prices are generally lower since it's outside of the standard tourist season. 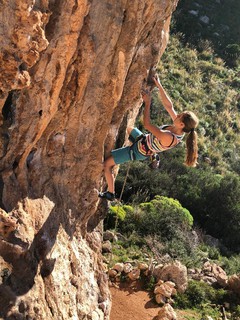 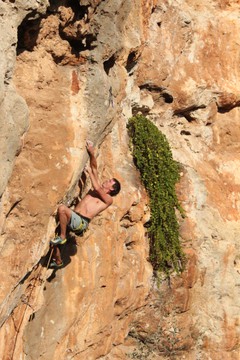 Check out what is happening in Sicily.