The Tre Cime di Lavaredo (Italian for "three peaks of Lavaredo"), also called the Drei Zinnen (German, literally "three merlons"), are three distinctive battlement-like peaks, in the Sexten Dolomites of northeastern Italy. They are probably one of the best-known mountain groups in the Alps. The three peaks, from east to west, are:

The first ascent of the Cima Grande was on August 21, 1869, by Paul Grohmann with guides Franz Innerkofler and Peter Salcher. The Cima Ovest was first climbed exactly ten years later, on August 21, 1879, by Michel Innerkofler with G. Ploner, a tourist. The Cima Piccola was first climbed on July 25, 1881, by Michel and Hans Innerkofler. The routes of these three first ascents are still the normal ascent routes; the Cima Piccola's route is the most difficult of the three.

Emilio Comici † was the first to climb the north face of the Cima Grande in 1933 in a party of three, after an ascent time of 3 days and 2 nights. This partly overhanging northern face is considered by climbers to be one of the great north faces of the Alps. 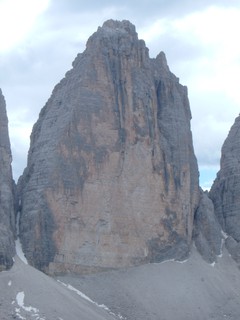 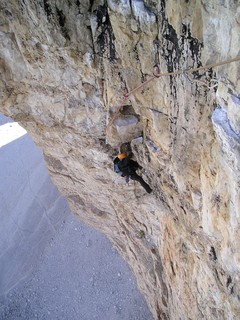 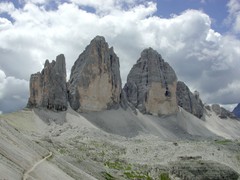 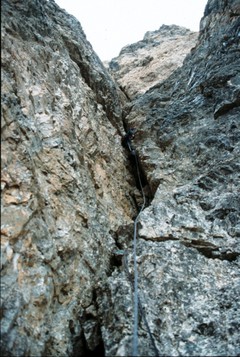 Felix Parham on ★★ Pruess Crack 5 - In the chimney section

Check out what is happening in Tre Cime di Lavaredo.