We don't know where this area is located. Do you?

Quiahuiztlán is an archaeological zone and ancient Totonac city in the State of Veracruz, Mexico. It is located in the municipality of Actopan on the Cerro de los Metates near the coastal town of Villa Rica.

This hill with steep walls and stained with scrub and grass is used for rock climbing. The visual panorama as you gain height is spectacular. The level of the climb is between 5.6 and 5.8 in general. The main route begins to the left of the path that climbs to the top of the hill, shortly after passing the highest section of the archaeological zone of Quiahuiztlán. This route was re-equipped in the early years of the 21st century by the CEMAC Veracruz climbing group. The route has two lengths armed and two meetings. A third pitch that presumably reaches the top is not armed.

This area doesn't have any sub-areas or routes yet!

If you are familiar with Quiahuiztlan please take the time to add what you know. Thanks!

If you login then you can add areas and/or routes. 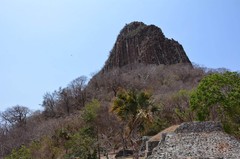 Check out what is happening in Quiahuiztlan.