Vegetated buttress between "The Surf Bowl" and "The Outrage Wall" with one of the longest climbs in Potrero Chico.

Most of the climbing here is in a State Park and there is no fee to enter. Please help maintain a clean environment in order to help maintain these privileges. Respect the local land people by packing out what you pack in.

Please don´t litter, some crags like LaHuasteca are a little runout, but thats how they were set, please avoid adding bolts. Rebolting efforts are much apreciated, just send a heads up to the local climbing comunity for safety reasons. 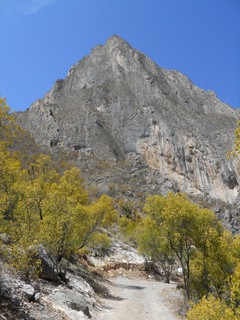 Check out what is happening in Time Wave Buttress.