The most attractive crag in this area is the one for climbing routes with the height of up to 35m. On this crag there is the largest number of equipped routes as well. At the moment there is 47 route. The crag can be reached along the road Podgorica-Kolašin, 5 kms away from the centre of Podgorica. By the first bridge over the Morača River, by the very bridge fence one should turn right to the narrow asphalt road where, after 150 m there is a lay-by. One should turn back for 50 m, where the marked trail leading to below the crag starts. It takes a 10 minute hike to get from the parking area to the crag. The largest section of the rock faces north-west, while its left end is slightly bent to the south-west. It has a width of 250 m. There are abundant opportunities for equipping hard overhanging routes. The crag is charactarized by a large number of tuffas. Best time for climbing is from early spring to late autumn. Owing to its north-western orientation the rock is not warmed up by the sun during the winter months, except its left south-western section. One should keep in mind that during the summer months the crag is in the shade till 2 p.m. and offers more than enjoyable climbing even when the temperatures in Podgorica reach their maximum. Routes marked with yellow lines (no. 5,10,11) were equipped by unknown climbers from Slovakia during the 2005 summer. First bolts are set at the 6th metre. On the several spots self-made absail rings have been set. Caution. The difficulty of routes varies from V do X-.

Important: crags in the area of Smokovac are located on private property, so we kindly ask climbers to behave politely and respect private property. Also, the rocks are open for further equipping but if you want to drill something at Smokovac it would be best to contact local climbers-the OCP. 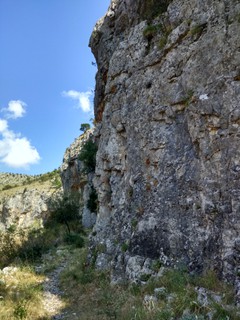 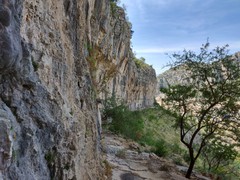 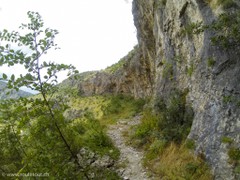