It may take a while to get a grip on the name:"O-te -pa-to-tu", or "Ote" for short. There are some excellent routes here, particularly low-grade trad climbs which are well-protected and reasonably long.

The rock configuration means that most of the better routes have a compact, knobbly lower half (nice climbing but sometimes with little pro), and a steeper, more featured upper half.

In northwest winds the crag is sheltered, though it's very exposed at the top. Avoid it in a southerly.

From Christchurch, take the Akaroa highway to Hilltop and from there the Summit road. About 3km past the Okains Bay turnoff is the Otepatotu Scenic Reserve, with the crag as its dominant feature. A track leads to the top of the crag, which is a pleasant spot. To access the cliff, follow the DOC track for about 50 metres, and at the top of the steps look for a marked track on the left, which leads directly to the right side of the crag (about 100 metres). Take care of the native vegetation, but there is an open season on gorse! The climbs are described from left to right, so the first-named climbs are at the far end when you reach the crag.

The crag was first visited by a group of wandering climbers in 1973, producing a series of excellent routes. These are the classic Ultimate Horror (16) - later "enhanced" with two bolts and Deviant (17) by Tim Wethey, *Oblivion (16) by Mike Franklin, N.S.U (14 ) by Mike Perry, and *Diploma (14) by Warwick Anderson. These visits established the crag, but the next new route was not until five years later with Hugh Logan’s *Eliminator (18). The crag’s hardest climb was produced by John Allen in 1979: Walk on the Mild Side (23). This necessitated a 7m fall due to removing hands from the rock at the wrong time! Another Allen prize was *Altar (21), the spectacular arete that gives the crag its profile. This was top-roped in 1973, but the difficulty (for the time) and limited protection preserved it for seven more years. Also climbed in 1980 were John Howard’s Falter (22) and Greenstick Fracture (20). Roddy McKenzie added Cabbage Milkshake (22). During the 1990s the crag had a few new routes put in by Hamish Dunn & Rob Battersby, mixing trad climbing in with bolts. Alan Hill and friends also put up some trad routes, mainly on the small cliffs to the left of the main wall, during the 90s and early 2000s. In 2011 seismic events forced a re-evaluation of local climbing, and Otepatotu became a preferred destination because of the absence of damage to the crag and ease of access. A track was cut to the base, all the existing lines were cleaned, and many new routes and variations were added, the main protagonists being Joe Arts, Lindsay Main, and Hugh Logan. A few routes (The Ultimate Horror and Dead Heroes) were retro-bolted, and bolt anchor stations were established along the top of the crag. Gorse-infested corners were cleaned out and development started on the left side of the main cliff (left of Walk on the Mild Side), resulting in about 15 new routes and variations. Many of these were of unexpected quality.

Apart from the main crag, with routes listed below, there are three smaller crags to the left, the Left, Middle, and Right Buttresses. The routes on these are listed separately for each crag. 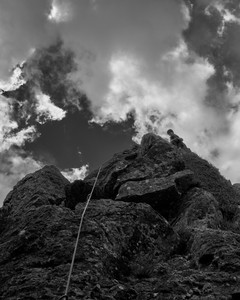 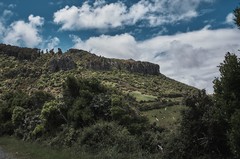 Otepatotu - Ote from the summit Rd

Check out what is happening in Otepatotu.