Plocha is one of the first and best arranged places in Macedonia for climbing. Suitable for climbing multipich routes and sport routes with grades from 3a to 8a. Within the place there are several boulders

Climbing locality Plocha is located in the south-eastern part of Macedonia along the highway Shtip - Radovish.

Plocha belongs to one of the best arranged climbing areas in the country with clearly marked access paths as well as fluorescent foils for easier orientation in the night hours.

The composition of the rock is Granite mixed with admixtures of basalt, in certain parts covered with moss which makes the routes very slippery after the rain and sometimes makes it impossible to climb.

The central rock is the largest and most suitable for climbing, with north-eastern exposure and the end parts with north exposure. The main crag is 70 to 90 meters high.

The central rock itself is naturally divided by two horizontal terraces which extend over the entire width of the rock. It offers excellent conditions for safe standing on the anchors.

Most of the routes are covered with bolts, and the traditional routes are left in the condition of the first climb, only the anchors are with bolts.

The climbing hut is located just below the main rock and has 12 beds in two rooms with solid kitchen and toilet. The lighting is with the help of solar panels. Next to the house there are two concrete places where you can light a fire or perform other outdoor activities. The routes are 5 to 15 minutes away from the hut through marked paths. The stay is with appointments and reservations. 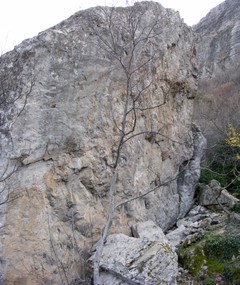 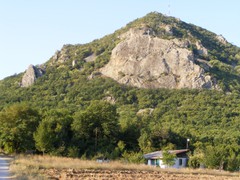 Check out what is happening in Plocha.