A two hour hike from laguna paron. Set a tent in the flat area before the moraine or bivy closer to the rock. All routes are very long, prepare for a long day or for a bivy on the wall at los flores ledge. 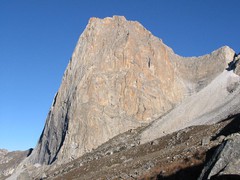 Check out what is happening in La Esfinge.