ROUTE INFO Cableway crags route names and grading’s below, listed in order from left to right as you face the crag. Grades upgraded/downgraded still to come. The crags to the East of the upper Cable way were bolted by the MCSA. The top anchors are marked with Cairns please see diagram attached and the various areas at the moment.

The crags to the West of the Upper Cable way are on the Iron Throne Adventure Park property and accessed by an entry ticket purchased at their entrance kiosk. The obvious head wall under the cable way line has been recently bolted with perma-draws on the top of each route for ease and safety. Iron Throne are looking to continue bolting and upgrading all the Cable Way crags.

• NB: THE TOP EAST CRAGS ARE ACCESSED BY ABSEILING IN TO THE START OF THE CLIMBS, PLEASE TAKE CARE WHEN APPROACHING AS THERE MAY BE CLIMBERS BELOW, SOME OF THE ABSEIL’S REQUIRE TWO RAPS. TIE KNOT’S IN THE END OF YOUR ROPE AND BE CARFULL NOT TO ABSEIL OFF THE END OF YOUR ROPES!! CHAINS ARE PROVIDED. A 80 M ROPE IS REQUIRED FOR THE ABSEIL INTO THIS AREA.

The West Kings landing crag is accessed by entry ticket through the Iron Throne Adventure Park from 6 November.

Detailed Access/ Direction to crags. After finding your way to the lower Cable way station "Aerial Cable way" and having signed in you have two options to access the crags you can either walk up which takes around half an hour. Or you can catch the cable car and walk from the top cable car, which if there is no new will take about ten minutes.

Kings landing crag is only accessible from walking up from Iron Throne Adventure Park. A path down from the upper cable way is planned.

Walking: The path up starts at a gate at the top end (North) of the Iron Throne Adventure Park after purchasing an entry ticket.

The path is clearly marked hiking trail, follow the signs to the lower area Kings Landing.

All areas can be reached with out having to go all the way to the upper cable car.

The lower Area "Ten Up" Ten Up is accessed as one tops out of the first small break through the rock band on the path mentioned. One will notice a prominent knoll about 60 m to the right (East) with a faint track leading off in this direction. The chains are marked with a Cairn and a tennis ball on a stake. After abseiling down these (30m abseil) the climbs can be found on this slab you have just abbed down or the harder ones on the prominent butters South of you. To access these you can either walk around the bit tress to the Right (West) or abseil down from the chains that can be found as one climbs over the top of the buttress.

The "Dust Bowl" is the crag with the big scoop / Cut back and "Need for speed" is the Cut back with Slab to the Right (East) of this. There is no obvious path to these from here, but please follow the plastic chevron tape that has been tied to trees so that a path may be formed in future.

Accessing the crags once at the top cable station. The upper crags "Dust Bowl and "Need for speed" areas are accessed by walking up to the top shop and toilet areas, next to the large brick tower and Radio mast.Once there, head East around the toilets, over a broken fence following the obvious path East down the ridge. After about 100m one will find a Cairn, and "tennis ball” markers. Follow these down to a ledge and chains above the Need for Speed Area, please be careful not to dislodge any rocks as there might be climbers below. The "Dust bowl Area" is now of to your left (West) and is about a 20m walk.

To access the lower crag "Ten up" one must follow as above - the plastic chevron tape that has been tied to trees so that a path may be formed in future.

There are not too many climbs open yet as the rock is fairly shattered / loose in places, but there is lots of potential at the bottom and further East along the ridge.

 The crag and parking: The climbing is on private property and the owners right of admission is reserved. Any individual making use of the crags access arrangement agrees to the conditions stated below. Contact the Magaliesburg (Pretoria) or Johannesburg sections of the Mountain Club of South Africa in case of any query or doubt. There is currently no entrance fee payable at this time. • Please note: Individuals enter this area at their own risk. Climbing is a high-risk activity and can result in serious injury or even death. The owners and / or the Mountain Club of South Africa take no responsibility for any harm or death that results from individuals accessing and using this property and fixed climbing protection including damage or loss to private property due to theft, fire or any other cause whatsoever You are responsible and accountable for your own safety and must not endanger those around you. Report any sign of danger or unusual wear on bolts • To ensure continued access please keep to the following: Visitors to the upper crags must sign the access book at the cableway ticket office and or Adventure shop located in the bottom cableway the access book has the MCSA logo on the cover, with the indemnity form for signing inside. Visitors to the lower crags must access through the Iron Throne Adventure Park.

Do not drive off the established roads and park only at the parking provided by the cableway.

Stay on established paths. Walk in single file on existing paths and avoid creating new paths. Visitors may only go to the climbing area and use the paths leading to them.

NO FIRES are allowed Reduce disturbance to animals specifically the Black Eagles and other nesting birds. Specifically no climbing and or bolting may take place near the Black Eagle nesting site (upper right rock face). NO OVERNIGHT CAMPING - Climbers are only permitted during daylight hours. Carry out all waste. This is a high use area, treat “peels” etc. as non-disposable rubbish. We request that you inspect the area for rubbish before leaving, do not ignore other people’s litter, pick it up and carry it out Take extreme caution when smoking. PACK OUT CIGARETTE ENDS Consider fellow climbers when relieving yourself and keep at least 50m away from the river, paths and climbing routes. Burry / carefully burn toilet paper but ideally use the facilities provided by Aerial cableway. Respect other visitors. Do not throw or roll rocks off cliffs when accessing areas from above as there may be climbers below. No guns allowed. In case of any accident / emergency call MCSA Mountain Search and Rescue on 074 125 1385 or alternatively 074 163 3952. Where applicable, assist and encourage others to adhere to the above.

Original routes in the area started at the upper east crags by the MCSA. The newly developed Iron Throne Adventure Park Opens in November 2021 by the outdoor enthusiasts running and funding the park.

No camping No fires 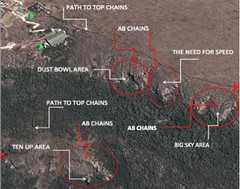 Check out what is happening in Cable Way Crags.