Discovered a year or so after the development of Cova del Diablo, Cala Varques offers a slightly less intimidating alternative to Diablo's taller cliffs. The rock is generally very solid and gives a variety of features, including stalactites, arches and some rather shapely caves. There are four main areas at Barques. The first is known simply as 'Cova' - a stunning stalactite cave around fourteen metres high. Further along the cliff are two more caves known as the Metrosexual Area and the Snatch Area. Both of these crags are connected by a giant grotto which can be accessed from the top of the cliff. The final feature here is a little further around the headland and is known as the Tarantino Cave - this is the tallest cliff in the vicinity, and houses some of the hardest routes on the island.

Park your car at the end of the dirt road. Depending on how busy the beach is, you'll have to park further away from the the start of the track... Walk through the chained gate and follow the track to the beach for 10-15min. The main cave (Cova) is on the left side of the beach and accessible by walking or swimming. For the other caves (Metrosexual and Snatch), keep walking an extra 5min through the bushes.

Most routes here were put up by Klem Loskot, along with the Salomon team, local enthusiast Miquel Riera and U.S. convert Chris Sharma. 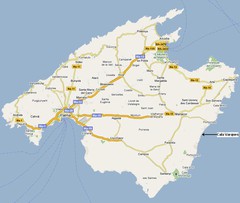 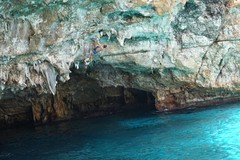 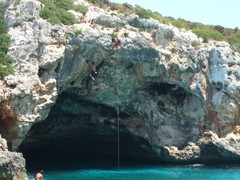 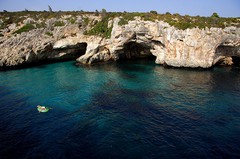 Check out what is happening in Cala Barques.