An extremely dangerous and technical climb that has claimed the lives of many mountaineers and should only be attempted by people with the necessary experience and equipment to be successful.

One of the most notorious climbing crags in the world.

The starting point for the North Face routes can be accessed by train from either Grindelwald or Lauterbrunnen.

In 1935, two young German climbers attempted to climb the North Face, they were met by bad weather and were later found to have frozen to death at a place now known as 'Death Bivouac' at 3300 metres.

In 1936, ten young climbers set out to ascend the North Face, but before the attempt began, a number of them gave up due to bad weather. Four pushed on to attempt the climb. After more bad weather after their attempt began, they found themselves unable to recross the Hinterstoisser Traverse, which left them stuck on the face as they had taken the rope which they first used to cross it. After more bad weather, an avalanche struck, killing everyone but Toni Kurz, who was clinging onto a rope. Three guides then attempted a perilous rescue attempt, in which they could not reach Kurz, but came within shouting distance and they found out what happened. The next morning they came back the next morning to find Tony barely alive. Kurz hauled himself off the cliff and back onto the face. The guides couldn't pass an unclimbable overhang that seperated them and Kurz. They threw him a rope long enough to reach him by tying two ropes together but Kurz couldn't get the knot to pass through his carabiner. He was within metres of the guides but they couldn't reach him. He was extremely tired and couldn't go any further so he died slowly.

In 1937 an attempt was made by Mathias Rebitsch and Ludwig Vorg, bad weather pursued and after three days on the Face they were forced to withdraw from the climb, which they did and returned alive.

The first successful attempt on the North Face was on July 24, 1938 by Anderl Heckmair, Ludwig Vorg, Heinrich Harrer and Fritz Kasparek. 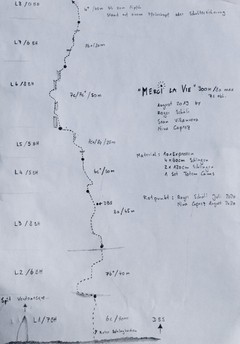 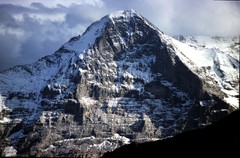 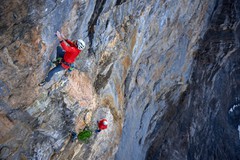 Jacopo Larcher on Odyssee 8a+ - Odyssee

Check out what is happening in North Face.