The best routes in UG were put in here by grant-funded Italians in 2002. All hardware is glue-in. Unfortunately all lower offs are only single bolts connected by a dodgy handline at the top.

There are 15 sport routes, mostly around 8-10m. One 28m route exists. The belay area is comfortable and partly sheltered from rain.

Rob's Rolling Rock wrongly claims ownership of this land. There is a long history of harassment and attacks against climbers here. Rob has been arrested, fined, but later released to continue to intimidate climbers into giving him money to climb here. The original bolting team has not intervened in years with this conflict. Their intention was to allow multiple locals to work the crag and benefit from the proceeds.

If you wish to climb here, you should stop by the Sipi Police to let your intentions be known. Be specific with the times and dates you plan to climb and ask for protection from Rob. In these cases, you should be fine. Showing up unannounced will incur harassment and demands for payment.

Rob does not own the land or have any legal right to it. The police have requested proof that he owns the land on numerous occasions, which he has failed to provide. Rob now enjoys a virtual monopoly here earned through years of dogged persistence.

If you wish to not involve the police, you can pay Rob a fee for climbing, or you can rent climbing gear from Rob in exchange for harassment-free climbing. Neither are recommended as the legality of the crag should be properly determined. Other's within the community have attempted to break into this monopoly, but also suffered Rob's wrath. Rob has been known to rent old, damaged and substandard equipment like tattered ropes and bent carabiners.

There are two options on the approach. From Sipi town, you can hike down the community trail to the farms below following the trail and switchbacks to the crag. Alternatively, you can abseil into this crag, but this will require a hike out. From Moses Campsite, you can find bolts/hangers from which to rap down. You'll need a 70m rope for this as the belay area is 33-34m below.

There are lots of options in Sipi Falls. Sipi River Lodge is an excellent, upscale option. Camping directly at the top of the crag is cheap, with amazing views (Moses Campsite), but their food/service is quite slow and frustrating. Others stay at Crow's Nest, Lacam Lodge, or Noah's Arc, which are all okay and nearby.

This is a fully developed crag that should be free to all. Please don't pay Rob as this money only fuels the ill-gotten climbing monopoly on this crag.

Bolted in 2002, this was the second bolted crag in Uganda after Insita Rock. Insita has now been updated/retrofitted, so Sipi has the oldest hardware in the country but should last for many years to come. The single bolt anchors should be retrofitted with backup bolts.

Some content has been provided under license from: © Matt Battani (Matt Battani) 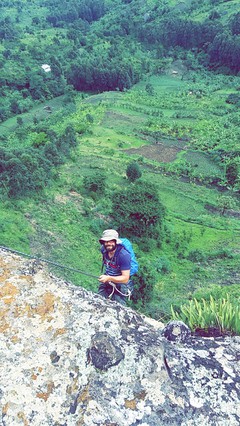 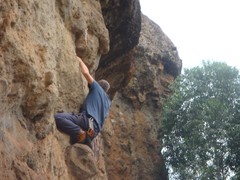 Check out what is happening in Sipi Main Wall.