Awesome technical and (very) long climbs on vertical and slightly overhanging rock. In the shade most of the day.

The area between gate 2 and 3 is private land, please behave respectfully!

Walk into the canyon until you find a well marked path going up right once you see the wall. The lower wall is on the right on the way up. There is a fixed rope on the right that leads to Karma cave.

When visiting and climbing at the Homestead, please help to maintain the climber trails used to access the climbing and along the base of the walls. Do a little bit of work each time you come and before you know it there will be well-defined and easy to maneuver and follow trails for all to benefit from.

If you choose to add routes to the area, please do your part to continue the Homestead tradition and use good hardware when equipping your routes. Plan your bolt placements to use solid sections of rock and to allow for minimal rope drag. All routes should have lowering anchors at the end of the routes and dangerously loose rock should be removed from the routes. To date there has been no chipping or gluing at the crag. Please keep it that way.

Thanks to Louie Anderson for providing all the info!! 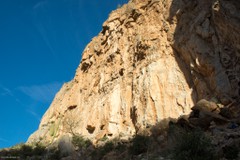 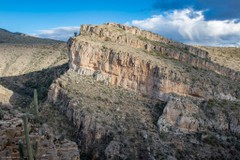 Check out what is happening in Rough Rider Wall.