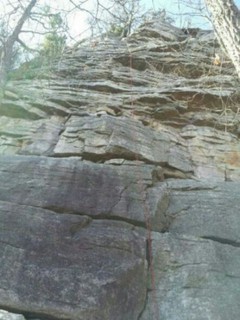 There is no known route history.

Due to the abundance of horizontal cracks and the limited number of vertical cracks, most Gunks routes have "PG" protection: adequate but not great, although many gear ratings were applied before small cams were invented. The horizontal cracks are great for small Tricams: the pink and red are especially useful. Small-to-medium cams with flexible shafts also work well. Climbs rarely need pro larger than 3". Hexes are not often carried, but sometimes work well.

Fixed pro is sometimes available, but many of the pins are "old and rusted and shouldn't be trusted". Bring a screamer or two for the questionable pin or bolt.

A "Standard Rack" for the Gunks:

Additional gear that is useful on some climbs:

The amount of gear that you carry will depend on the climb, your experience, ability, and familiarity with the route and with the Gunks. If you're new to the Gunks, err on the side of taking a little more gear rather than a little less.

Many routes can be climbed and rappelled with a single 60m rope. Double ropes can be handy, however, with the traverses, wandering pro, and roofs encountered on the typical Gunks climb, and come in handy to descend in fewer rappels.

Many popular routes have bolted rap stations, but sometimes trees are used for rap anchors. Bring some webbing along in case you need to beef up a sling anchor on a tree.

Two-way radios can be useful for communicating past the big roofs often encountered on Gunks climbs. High Exposure, Disneyland, and especially Shockley's Ceiling are routes where radios can be much more effective than shouting.