grAId - a play on the word ‘grade’ and ‘Artificial Intelligence, AI’ - is the answer to the age-old problem of grading routes. This topic has cost more than one friendship and resulted in endless, often ugly discussions between climbers. The reason being that grading systems around the world rely on subjective factors and thus have several deficiencies.

grAId automatically grades routes based on ascent information by climbers. It does not need a grade to start with but uses a mathematical model to accurately predict the grade of a route, taking subjectivity out of the grading process.

Conventional systems for grading the difficulty of routes do not have a formal statistical basis. The accepted grade for a route is determined based on the opinion of a few people; primarily the climber(s) who first ascended the route.

The subjectivity and influence of different raters for each route is a source of inconsistency: indeed, climbing slang has terms to describe routes that are relatively difficult (‘sandbagged’) or easy (‘soft’) compared to their claimed grade.

While some grading systems grades use an integer scale (such as Ewbanks), there is no formal interpretation of the numerical difference or ratio between grades. Subjective grades also lack refutability: they are a matter of opinion, not evidence.

Instead, it’s desirable to rate route difficulty objectively, with measurable accuracy and an interval scale.

To do so, the algorithm takes a set of ascent tuples consisting of the ascent type, climber, route, and a time period as input and produces maximum a posteriori estimates of climber and route ratings. A climber may have multiple ratings, corresponding to each discrete time period where that climber has ascents. The route and climber ratings can be used to generate an estimate of the probability a climber at a given time will be able to climb a particular route successfully.

grAId in simple words: Imagine you’re seeking glory and wander into an unfamiliar crag without a guidebook. Your friend, who can redpoint most 19s but has been working several grade 21 projects for months, proceeds to flash a route. You guess it’s grade 19 or lower. If your friend dogged it instead, you might guess it’s above grade 19. The more climbers of different skill levels trying the route, the more information you have to pinpoint the grade.

This is the basis for a scientific grading system. Instead of using people’s opinions about how hard routes are, you observe the actual outcomes of the ascents. To put a single number on how difficult a climb is, you can use the odds that you’ll send it.

theCrag is using ascent information to calculate the grAId for each route, converts it to the respective grading system using its internal grade converter and displays it as a grade contribution on the route page. The more successful and unsuccessful ascents are recorded for a route, the more accurate grAId is. Based on additional data points, grAId is updated periodically and might thus change over time. theCrag does not display grAId for routes if insufficient data points are available or the quality of the data points is not sufficient. 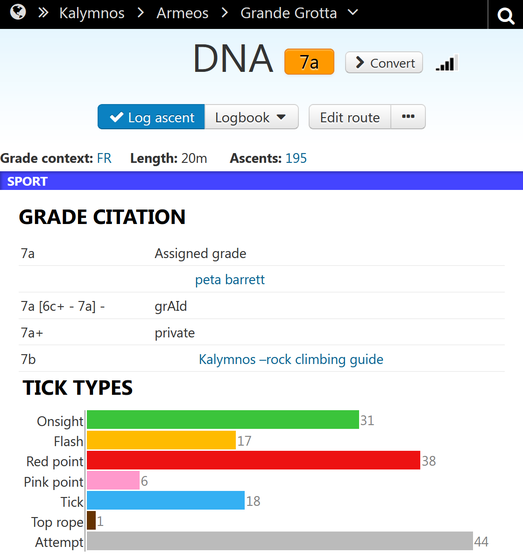