One of the highest crags in the world (4290m.a.s.l) with a mystic rock forest formed by the erosion of time.

Since 2016 there have been ongoing issues at the site. Some climbers have been there since and had no issues with climbing, however the latest information from the land caretaker is that the area is closed. Up to date details are usually available at the Huaraz Climbing Guide Facebook Group - https://www.facebook.com/Huaraz-The-Climbing-Guide-616393071820103/?fref=ts - do your own research before you go.

UPDATE JULY 2019: Access has stabilised with a local administrator currently working at the crag. 80% (reportedly) of chopped bolts have been replaced, with the rest planned to be done by the end of October.

It is a mystic rock forest formed by the erosion of time and one of the most impressive geological attractions of the region. Hatun Machay – which in Quechua language means Big Cave - is a mere 1 1/2 hours from Huaraz, situated in the Cordillera Negra (Black Mountain Range) at an altitude of 4290 m.a.s.l.. This zone is home to an amazing stone forest of divers and interesting array of rock formations. The area is over 200 hectares in total and offers in its many sectors caves, ruins, and stone carvings and paintings dating back 10,000 years.

Today Hatun Machay is the largest Rock Climbing Centre in Peru. There is an extensive variety of all levels sport routes from absolute beginner to the truly hard core. Hatun Machay is also a boulders dream with enough problems to last a life time.

This is not all. Hatun Machay now has his own refuge sleeping up to 50 people. The Refuge offer beds, kitchen facilities, camping and bathrooms. UPDATE: As of July 2019, the hut remains burnt out. However, it is possible to stay in some of the smaller huts; BYO bedding.

Hatun Machay is a sport climber’s paradise, with bolted routs ranging from level 4 up to 8a. There are also hundreds of bouldering routes within a 15 minute walk of the refuge, ranging from mild difficulty to near-impossible.

The most developed area to date is the northern sector, which faces the refuge, but whole areas are being added every month as we open up the amazing potential of Hatun Machay.

In the lower part of the valley we are currently opening up a new region with rock walls at up to 100m (300 feet). It’s a 30 minute walk from the refuge and offers a breathtaking view of the rock formations.

Hatun Machay now boats more than 250 sport routs in a radius of 1 Km or so. A detailed topographical map is available with routes, names, grades, heights and quality at climbs.

Hatun Machay is now considered the number one rock climbing destination in Peru.

Because of this and much more Hatun Machay is a place you can't miss.

It is easy enough to organise a taxi in Huaraz to take you to Hatun Machay, around 120 soles one way. Once there, the administrator can book a taxi back for you.

A local company "Andean Kingdom" (http://www.andeankingdom.com/) organizes a daily bus trips to and from the crag from Huaraz costing 25 Sols (10 USD) for each way for each person.

There is a modern hut with full kitchen and hot water located a 5min walk from the crag for 30 Sols (12USD) per night. You need to bring your own food, however beer is available at the hut. UPDATE: As of July 2019, the hut is burnt out. There is no kitchen, but running water and flush toilets are available.

The archaeological complex and rock formations of Hatun Machay are located near the community of Pampas Chico not far from the Laguna Conococha in Ancash, at an altitude of 4290 meters (14,000 feet).

From Huaraz, Private Transport: The turn off for Hatun Machay is 69 km from Huaraz. Leave town on the main road towards Lima, passing through Recuay and Catac, until you reach km # 131. (This will be on your right hand side, approximately 35 – 40 minutes from Catac.) Turn right onto a small dirt road which switchbacks up the mountainside. After approximately 6km (4 miles) you will come to a road junction – turn left and follows the road up and over the hill and down into the valley. You won’t see the refuge until you are almost there, so have faith and don’t give up!

Hatun Machay now has his own refuge sleeping up to 50 people. The Refuge offer beds, kitchen facilities, camping and bathrooms. UPDATE: As of July 2019, the hut is burnt out. There is no kitchen, but running water and flush toilets are available. Camping by the hut is the best option.

In agreement with the local community many areas of Hatun Machay have been declared “nature zones”. The aim is to preserve the ecological balance in the area whilst respecting the community’s land and cultural history. 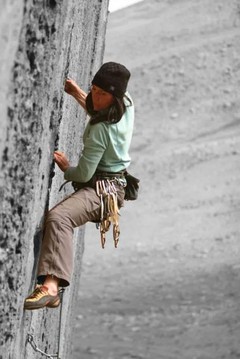 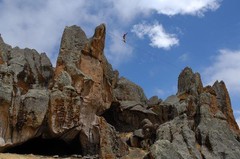 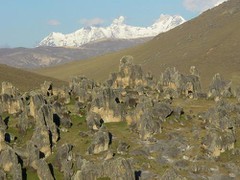 Check out what is happening in Hatun Machay.