Please refer to the following link for PV's current advice:

For a list of crags in SPA areas see:

Much of this guide is based on Kieran Loughran's wonderful Mount Stapylton Amphitheatre print guide (1996). It has been updated by Neil Monteith and friends (2005-2007).

One of Australia's premier areas. A high concentration of quality routes of every variety. 'Taipan Wall' is world renowned for offering some of the most amazing steep orange sandstone routes around. The bouldering is also very popular.

Useful Info: Much of this guide is based on Kieran Loughran's wonderful Mount Stapylton Amphitheatre print guide (1996).

Please note that due to the fact that the Grampians is a National Park, dogs and other pets are not allowed in the park except in vehicles on sealed roads and in sealed car parks. See http://m.parkweb.vic.gov.au/explore/parks/grampians-national-park/safety-and-regulations#overview

Mount Stapylton is at the northern tip of the Grampians(Gariwerd), 30km south-east of Horsham. Train and bus services can get you to Horsham from 'Adelaide' or 'Melbourne' but after that you are on your own.

'Access' by car is easy. All but the last 4km is on sealed road and the unsealed road is negotiable in all weather conditions but care must be taken with corrugations, suicidal marsupials, emus and feral tourists. Hitching is not a good option because you'll probably have to walk a few kilometres and end up isolated in an empty camp-ground a long way from anything.

From 'Melbourne', follow the Western 'Highway' towards Horsham, passing through Ararat, Stawell and Dadswell's Bridge, until you're 11km past Dadswell's Bridge and just after the 269km post. Turn left and continue for 6½km, turn left (signpost Mt Zero) onto a dirt road. After 1.2km turn right (signposts Flat Rock 2.5, Mt Zero 1) and follow the road for 2½km to the 'Mount Zero' Picnic Area.

From Horsham, follow the Western 'Highway' towards 'Melbourne' for 19km, 4km

The lone visitor can normally find climbers in the carpark at 'Hollow Mountain' on any weekend...but not always! During the week you may get lucky but are more likely to strike youth groups and corporate team-builders. If you have no organised partner, your best option is to go to Mount 'Arapiles' first to make some contacts.

While the Amphitheatre is one of the important climbing areas in 'Victoria', development has been sporadic.

When the area was discovered in the mid-sixties there was an intense period of development that culminated in one of the most intense months in Victorian climbing history.

In the four weeks from 23rd April to 18th May 1966, Mike Stone, Ian Guild, Chris Dewhirst and Gary Kerkin put up 'Spillway', 'Simpleton' and Seventh Pillar. In that same month this group, minus Gary Kerkin but with John Moore also added 'Scorpion' and 'Skink' at 'Arapiles'. These were the hardest, most serious climbs around, done in one brief period by a small group.

It's hard to appreciate what it was like in the sixties. Even in the mid-70s it was possible to arrive at 'Arapiles' on a mild summer weekend and find only five people there. 'Arapiles' was popular, Stapylton was not and, with the sixties, we are talking a decade earlier: we are talking isolation.

Contemplate placing the bolt runner on 'Simpleton', jamming your head in the crack to free both hands for drilling, or climbing hand-over-hand up a knotted rope to regain the first belay of Seventh Pillar or standing around in hard rubber while hand-drilling the bolts on Spillway? It's quite sobering.

Thomson and Carrigan's one-day ascent of Seventh Pillar in 1975 was no great shakes by the standards of the day. That is in theory. In reality this climb had people intimidated. The general steepness and atmosphere clobber aspirants to the present day. It was an indication of things to come from Carrigan.

Glenn Tempest and Kevin Lindorff had a spree in the Amphitheatre in April and May of 1977. They didn't break new ground in terms of grades but, in two weekends, they brought Stapylton into the modern era. 'Benn Gunn' and 'Asterisk' free, 'Starstruck', 'Technical Ecstasy', 'Sweet Dreams' and 'Atomic Tadpole' seemed to open the gateway, but it was not to be. Why? Because they weren't into rap-bolting or inspection in those days and obvious protectable climbs were exhausted.

At this time abseil bolting of routes was not common. Abseil bolting first appeared in 'Victoria' at Hanging Rock in the late sixties and did not catch on. Andrew Thomson reintroduced the concept when he did 'Swinging' at 'Arapiles' in April 1976 and it was quite controversial. When Tempest and Lindorff did their routes in the Amphitheatre, they were rejecting the use of chalk as unethical, let alone rap-bolting! This looks funny now, but it was taken quite seriously at the time. I suppose it has shades of British mountaineering in the thirties when crampons were rejected as unethical. Anyhow, Tempest and Lindorff set a new standard at the crag and then left it. Curiously, when Lindorff revisited Stapylton in the early eighties with a revised bolting ethic, he ignored his old stamping-ground in favour of Summer Day Valley.

At the start of the Eighties, Carrigan and I crossed from Summer Day Valley to The Amphitheatre to cut Seventh Pillar to one aid point (Carrigan did the work and dragged me up after him). At the end of the day we walked the length of 'Taipan Wall' and could see no more free propositions; quite hilarious in retrospect. I don't suppose Kim was having me on?

Anyhow, among other things, Carrigan put up 'The Great Divide', Matheson did 'Serpentine', Monks freed Seventh Banana and Pollitt did every climb on the wall as well as adding Rage, the direct version of 'Serpentine'.

'Taipan Wall' is far and away the highlight, but much of the rest is also deserving of your attention. Enjoy. 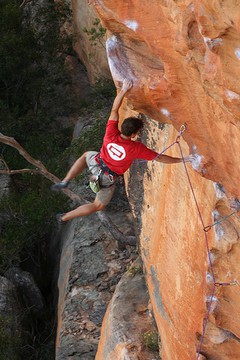 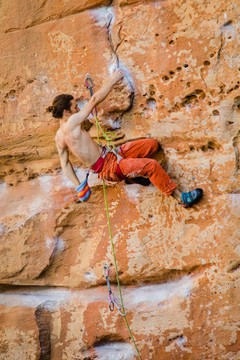 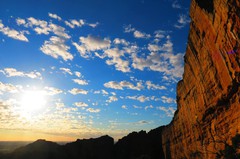 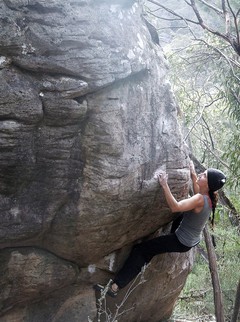 Check out what is happening in Mt Stapylton Amphitheatre.